2018-19 Get It Together High School Seat Belt Challenge

Thirty local high schools competed in the 2018-2019 Get It Together High School Seat Belt Challenge (GIT), a program led by Drive Safe Hampton Roads (DSHR) and supported by other traffic safety groups.  Get It Together ended with 83.3% of the schools having an 80% or better overall belt use.  53% of schools had 90% or better overall belt use.  There were 4 schools ending the Challenge with 100% DRIVER belted usages.  Each of the participating schools put forth a significant effort to raise students’ awareness of the importance of wearing seat belts every time they ride in a vehicle.  Winners of this year’s Get It TogetherChallenge were announced on March 19 at an awards ceremony at Old Dominion University’s Ted Constant Convocation Center. 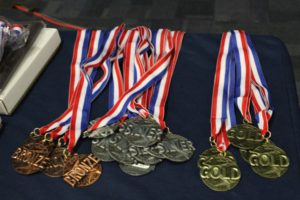 This year’s efforts produced an overall 7.9% increase in seat belt use.  The average seat belt use rate at the beginning of the Challenge (the baseline) was 81.2%.  The final use rate was 89.1%, 5 points higher than the state average.  Some schools increased belt use as much as 38.6% from the start of the Challenge and others showed belt use as high as 100% percent at the end of the Challenge.  This year’s Get It Together recognition was based on both the number of activity points and a recorded increase in seat belt use over baseline.  The 11 Gold Medal winners showed active participation in all categories - pledges, seat belt checks, activities, video; a minimum of 1000 activity points; and improvement in seat belt use over baseline of 16% or greater OR a final seat belt use over 95%.  There were 12 Silver Medal winners and 7 Bronze medal winners.  Drive Safe Hampton Roads joined with its community partners - AAA Tidewater Virginia, State Farm™, and DMV Virginia Highway Safety Office - in congratulating all of the Get It Together high school participants this year.