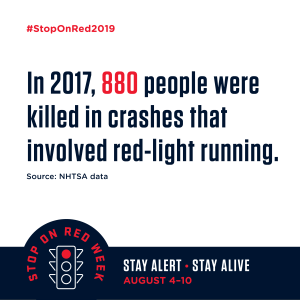 Hampton Roads will observe National Stop on Red Week 2019, which runs Aug. 4-10. Red-light safety cameras are part of a comprehensive effort to improve traffic safety for all motorists, cyclists and pedestrians who use our roads.

Created by the Federal Highway Administration, National Stop on Red Week aims to educate drivers about the dangers of red-light running and to reduce the number and severity of crashes.

The U.S. Department of Transportation found that one in three Americans know someone who has been injured or killed in a red-light running crash.

Drive Safe Hampton Roads is reminding all drivers to ALWAYS STOP on RED. Share this graphic and help make our community even safer:  Safety is the responsibility of every driver — not just during Stop on Red Week, but every day and every time someone gets behind the wheel. Intersection safety is an extremely important aspect of road safety in our community.