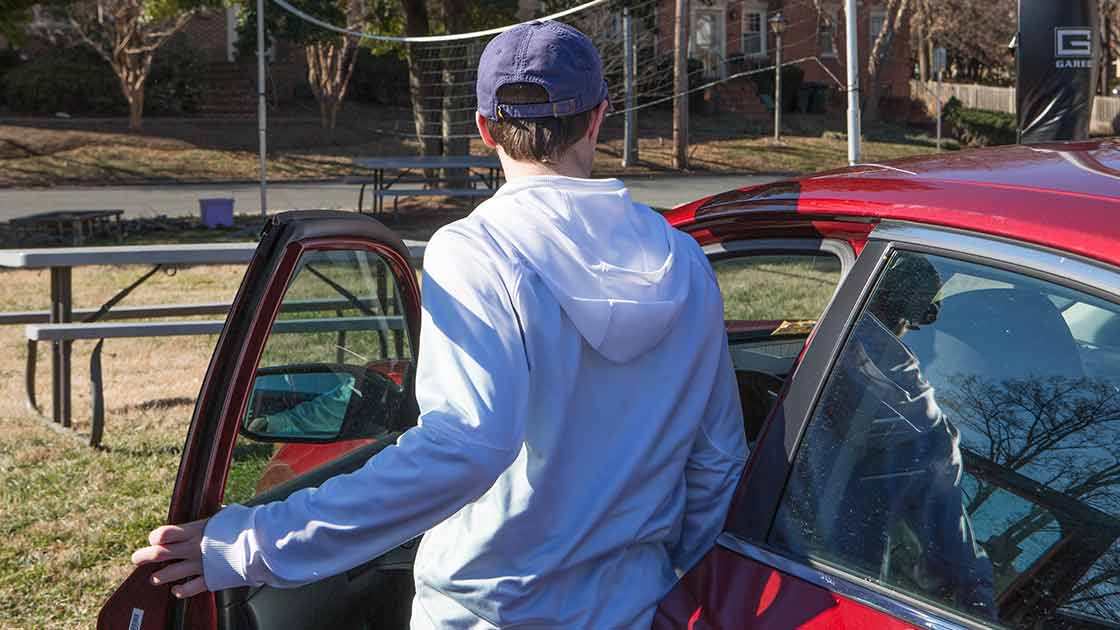 My first crash happened my junior year of high school. I had gotten my license the previous spring and scored a coveted parking spot on campus, so I did what good friends did back then and began driving two buddies to school every day in my parents’ old Toyota Camry. One morning, as I made the precarious left turn out of my friend’s steep driveway, a car came whipping around the curve and smashed into my rear driver-side door. I never saw it coming.

Fortunately, no one was hurt — the girl in the back seat was sitting on the opposite side — but the moment of impact is seared in my memory. I can even tell you what song was playing on the tape deck (yes, we’re talking ancient times here).

After I started working at IIHS, I wondered about that crash. Did I fail to see the other car because I was distracted by my friends or the music? How well would my car have protected me if the impact had been more forward? (Probably not that well, as it would not have had side airbags in those days.)

Now that I’m the mother of a teen driver, I’ve been thinking about that crash again — and how much worse it could have been.

Part of my job at IIHS is to compile our list of recommended vehicles for teens, using parameters set by our experts. We began this list in 2014 and have published it jointly with Consumer Reports since 2020. I’ve also led the creation of Navigate to Safety, a series of roadmaps for parents of teen drivers based on IIHS research, which we published last year with the American Property Casualty Insurance Association.

Both these resources are intended to help parents keep their kids safe during one of the most dangerous stages of life. Motor vehicle crashes are one of the leading causes of death for teenagers. Per mile driven, the fatal crash rate for 16-17-year-olds is triple the rate for drivers 20 and older.

Although teens’ immaturity and inexperience make driving inherently risky for them, policymakers and parents like me can draw on decades of research to reduce that risk. Solutions include strong graduated licensing requirements — including a ban on teen carpools like the one I was driving when I crashed — with parents reinforcing the rules. The right vehicle is also key. That means avoiding excessive horsepower and vehicles that lack adequate crash protection, including very old vehicles and very small ones.

Our warning about small cars came under criticism when we tweeted it out recently. Advocates for pedestrian and bicyclist safety are justifiably concerned about the trend toward larger passenger vehicles and the threat they pose to vulnerable road users. The heavier the vehicle, the more deadly it is when it hits someone. Research, including ours, has shown that the shape of today’s SUVs is also more likely to knock a pedestrian down, resulting in more severe injuries than when a pedestrian lands on the hood after being struck in the legs. In addition, our researchers have found that SUVs, pickups, vans and minivans are more likely to hit pedestrians while turning, perhaps because of visibility issues. Given those facts, why would we advise parents to select these vehicles over less threatening minicars?

I’m certain that no parent wants their teen driver to be involved in a crash that seriously injures or kills another human being. But from the day we bring our babies home, our job as parents is to keep them safe. Larger, heavier vehicles are more protective of their occupants than smaller, lighter ones.

IIHS doesn’t advise parents to buy their kids monster trucks. Our current list of recommended used and new vehicles for teens includes some midsize SUVs and minivans, but no pickups or large SUVs meet our current criteria. In recent years, we’ve started including options in the small car category, but we don’t recommend anything under 2,750 pounds. Our goal is to give families a wide variety of affordable used and new options, including practical family vehicles that can be passed along to the child later.

We warn against tiny cars because we have found that these are the models teens often drive — if they’re not driving extremely old cars that are likely to be missing basic safety features or good structure.

Driving a small car has become riskier thanks to the mix of vehicles on the road. In 2000, the average curb weight of registered passenger vehicles was 3,565 pounds. Twenty years later it was 3,937. Given the popularity of large trucks and the proliferation of electric vehicles, which are heavier due to their batteries, this trend will likely continue.

For pedestrians, bicyclists and those in smaller vehicles, the growing weights are a real concern. But rather than asking individual consumers to opt for lighter vehicles, the best way to address the issue is through regulation. That means requiring safer front-end designs for SUVs and pickups and technologies that can prevent collisions with pedestrians and cyclists, especially at night. Constraints on passenger vehicle weight could also be considered.

Of course, there is another option for keeping teens safe: not allowing them to drive. Indeed, IIHS and HLDI studies have found that states with later licensing ages have lower teen fatality rates and insurance losses than states that allow early licensure. We encourage parents to consider setting a higher minimum age than the one in their state.

At some point, however, young people in most of the U.S. and Canada need to drive. Many of us live in car-centric communities with limited public transit and walking and biking infrastructure. Here again, policy changes, not individual choices, can make the biggest difference. In the meantime, parents need realistic guidance that they can follow.

In my son’s case, learning to drive has given him independence and opportunities, including a parttime job, that would have been closed off to him otherwise. When he first became eligible for his learner’s permit at 15½, he wasn’t that eager to drive, to my relief. But soon he saw his friends learning and realized he wanted to start the process before junior year with its academic pressures.

Once he got his license, we didn’t run out and buy him his own car. We’ve been letting him drive mine, a 2017 Toyota Prius. It’s a small car on the heavier side — 3,010 pounds — with automatic emergency braking, lane departure warning and blind spot detection. It’s also the newer of our two vehicles. Years ago, I would have made him drive the old car, a 2010 model that wasn’t built to the same level of safety. Now I know better!

I hope luck will always be on my son’s side, as it was for me that morning in high school. Just in case, though, I’m doing what I can to make driving as safe as possible for him.